After the officer has made the stop of the driver, the officer will then commence the second phase of the driving while under the influence investigation. The officer is trained to look for the existence of a number of observations to help form an opinion of whether to arrest the motorist. The officer will only look for facts that demonstrate a person could be intoxicated and will not consider the absence of all the other facts in making the arrest decision. Once again, a qualified attorney can point out problems and facts the officer overlooked. Many times, the officer’s opinion is incorrect, and unless the driver has someone on their side, this information is overlooked.

Finally, after making the observations, the officer will move to the third phase, pre-arrest screening. During the pre-arrest screening, the officer will generally administer Standard Field Sobriety Tests. The Standardized test are the Horizontal Gaze Nystagmus, the Walk and Turn, and the One Leg Stand Test. These tests were never developed to determine impairment but were developed to help the officer make an arrest decision. An arrest decision is approximately a 10-15% chance that the crime occurred.

In Nebraska, a driver is not required to perform the standardized test. These standardized tests were developed to put the driver in an awkward and unnatural position. All of these tests have specific administration and evaluation standards. Many times the officer does not follow these standards. Due to the problems in the administration of these tests, it is necessary for an attorney who is familiar with the type of training the officer has to examine if the test were conducted and evaluated properly, as well as, if the officer was legally allowed to request the test in the first place. The officer who evaluates this test will not consider all the things the driver did right. The officer will only look for the things that were done wrong. Once the officer has collected all the information about what the driver did incorrectly, the officer will arrest and request a blood, breath, or urine test. 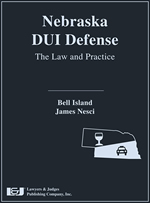 For even the most seasoned attorney admitted to practice in the State of Nebraska, defending DUI cases has always presented special challenges. Today mounting a successful defense is more difficult than ever. Now you have the advantage with Nebraska DUI Defense: The Law and Practice. This text and supplementary DVD contain the most important information to help you attain a successful verdict.

Written by Bell Island and James Nesci, both members of the National College for DUI Defense, Nebraska DUI Defense: The Law and Practice ensures that you understand the chemical, biological and technological concepts and issues underlying DUI prosecution and defense in the State of Nebraska. The authors provide the most up-to-date information available on key areas of DUI law in Nebraska including DUI Investigations, Driving and Field Sobriety Testing, Drug Recognition, Evaluation and Chemical Testing, Blood Alcohol Calculations, Pre-trial Investigations and Motions, Practice, Plea Offers, and Agreements, DUI Trial Procedures, and more. Read More

If you would like to schedule an initial consultation contact a Nebraska drunk driving / DUI / DWI attorney, representing clients in Bridgeport, Nebraska at the Island Law Office, PC, LLO. Give us a call at (308) 633-4040.

© 2021 Island Law Office, PC, LLO All Rights Reserved, The information you obtain at this site is not, nor is it intended to be, legal advice. You should consult an attorney for individual advice regarding your own situation. Address: 1428 10th Street, Gering, Nebraska 69341 Toll Free (844) 236-3440 Tel: (308) 633-4040 Fax: (308) 633-4044 | Gering, Nebraska based attorney practicing in Nebraska and surrounding areas which include the cities of Alliance, Bridgeport, Chappell, Chardon, Gering, Gordon, Harrisburg, Harrison, Hyannis, Kimball, Rushville, Scottsbluff, Sidney, Oshkosh and the communities that make up Banner, Box Butte, Cheyenne, Dawes, Deuel, Garden, Grant, Kimball, Morrill, Scotts Bluff, Sheridan, Sioux counties in Nebraska.